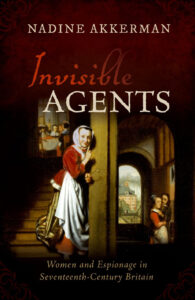 A dense, hugely researched and admirably learned history of women spies during the Civil War. (Dominic Sandbrook, The Sunday Times)

A triumph of scholarly rigour, original thinking and crisp prose. It is, in every sense, a cracking book. (Jessie Childs, The Daily Telegraph)

Invisible Agents is a work of deep scholarship that suggests Akkerman would have made an excellent spy catcher. (Leanda de Lisle, The Times)

An intriguing book … [Akkerman’s] own remarkable ability to ferret out secrets is often as great as that of the spies she writes about. Time after time, women whose lives, careers and even names have been forgotten or misread spring into stealthy, double-dealing life on the page. (Adrian Tinniswood, Literary Review)

Invisible Agents breaks significant new ground in its focus on the special roles of Royalist and Parliamentarian ‘she-intelligencers’ and their hidden world. This is a model monograph, meticulously researched and relentlessly questioning, which succeeds admirably in uncovering closely guarded secrets. (R. C. Richardson, Times Higher Education)

If they do, then I deserve at least a lifetime supply
#ElizabethStuart @OUPHistory

Dear rose growers, do you have an Elizabeth Stuart rose for sale? @RHSBridgewater @hayloftplants @Davidaustinroses