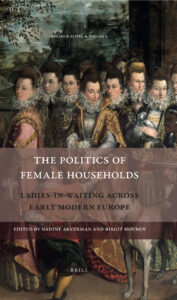 The Politics of Female Households is the first collection that seeks to integrate ladies-in-waiting into the master narrative of early modern court studies. Presenting evidence and analysis of the multifarious ways in which ‘women above stairs’ shaped the European courts of the sixteenth and seventeenth centuries, it argues for a re-assessment of their political influence. The cultural agency of ladies-in-waiting is viewed in the reflection of portraiture, pamphlets and masques: their political dealings and patronage are revealed through analysis of letters, family networks, career patterns, gift exchange and household structures, as well as their activities in the fields of intelligence-gathering and espionage. By concentrating on a previously neglected area of female agency, this collection demonstrates clearly that the political climate of Europe was often shaped outside the male-dominated institutions of government and administration.

Chapter 3 of the new book done, but not quite dusted. Time for a walk in the village … #amwriting #Adderbury